The term "full stack developer" has become fashionable over the past year or so and is even skyrocketing as of last month. 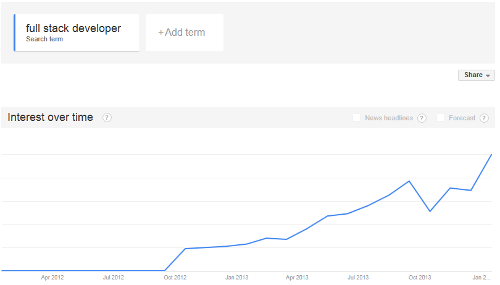 "Full stack" means being able to develop on all three tiers of the classic three-tier architecture that first became popular in the late 1990's, shown below.

But in the modern data analytics-driven enterprise, there are many more components or tiers. Although a canonical architecture has yet to emerge, if we combine the Lambda Architecture with the consensus from last week's Boulder/Denver Big Data Meetup that raw incoming data should be archived permanently while analytic byproducts should be kept in some sort of RDBMS (or NoSQL that is fast and easy to query), then we might end up with something like below. 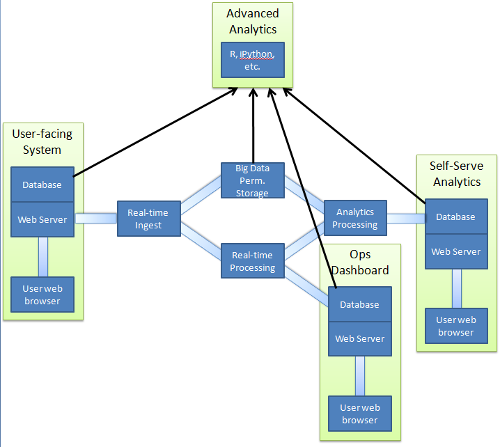 Now while three tier systems have always had some sort of daemons doing stuff, it was never to the degree of needing to know Big Data systems (e.g. Hadoop or Cassandra clusters) and Data Streaming technologies (Storm, Spark Streaming, Kafka, etc.). Advertising oneself as a "full stack developer" may telegraph unfamiliarity with these types of technologies. At best, it's ambiguous.

For Big Data/Data Analytics/Data Streaming architects, data analysts, developers, and ops there needs to be a new term. (BDDADSADADO?) Or perhaps "Full data flow X"? But then what is X?

It can't just be "Full data flow developer" because this new paradigm of dev/ops applies to Big Data as much or more than anywhere else. Often in-place ops teams used to jockeying web server VMs are unfamiliar with ops on, e.g., a Hadoop cluster, so it's up to the Hadoop developers.

And not just dev and ops cover everything. Obviously performance is always an issue when it comes to Big Data. It's not just "performance tuning" a stored procedure like in the three-tier days.

And it's not just dev, ops, and architecture. If developers don't eat their own dog food by participating in or at least trying some of the data analytics -- the self-serve data analytics if nothing else (e.g. custom dashboard or Tableau) -- then developers will be building the wrong thing.

So perhaps the new term should be "Full data flow systems engineer"?

I'm open to suggestions. But it's time to retire the term "full stack developer". It's a 2013 term referring to 1998 technology.