SSD to the rescue of Peak Hard Drive? 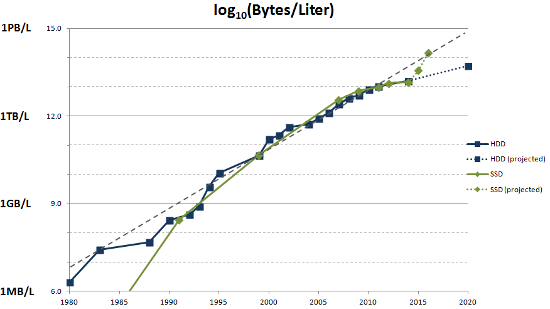 A couple of months ago, I blogged about Peak Hard Drive, that hard drive capacities were leveling off and how this would impact the footprints of data centers in the era of Big Data. Since then, there have been two major announcements about SSDs that indicate they may come to the rescue:

The 16TB in 2016 is phenomenal and would be four years sooner than the 20TB in 2020 predicted by Seagate. Much more than that, if the 16TB SSD will be in the same form factor as its announced 4TB little brother, then it will be just a 2.5" drive in contrast to the presumed 3.5" form factor for the 20TB Seagate HAMR drive. As you can see in the chart above, the 16TB puts us back on track of the dashed gray line, which represents the storage capacity steady growth we enjoyed from 2004 to 2011. 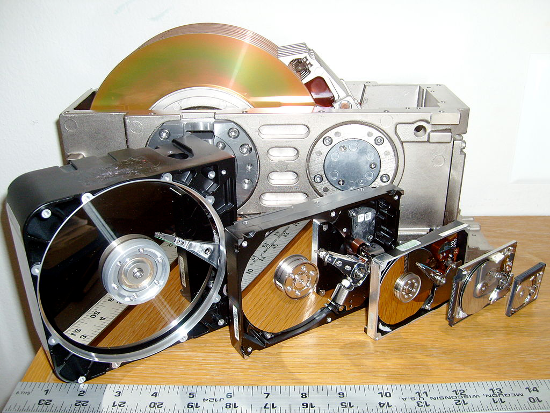 Photo by Paul R. Potts in the Wikimedia Commons.

It is because of the varying form factors that in my blog post two months ago I adopted the novel "Bytes/Liter" metric, which is a volumetric measure in contrast to the more typical "aerial" metric that applies to spinning platters but not to SSDs. (Actually I changed the metric from log10(KB/Liter) from two months ago to log10(Bytes/Liter) now, reasoning that Bytes is a more fundamental unit than KB, that it eliminates the KB vs. KiB ambiguity, and that it makes the chart above easier to read where you can just pick out the MB, GB, TB, PB by factors of 3 of the exponent of 10.) This volumetric metric can handle everything from the 5.25" full-height hard drives of the 1980's to the varying heights of 2.5" hard drives and allow us to linearly extrapolate on the logarithm chart above.

The direct overlay of the SSD line over the HDD line for the years 1999-2014 came as a complete shock to me. SSDs and HDDs have vastly different performance, form factor, price and performance characterstics. Yet when it comes to this novel metric of volumetric density, they've been identical for the past 15 years!

The configuration in the 2U chassis above is typical for 2.5" drives: just 24 drives, because they are all accessible from the front panel. I'm not aware of any high-density solutions for 2.5" drives such as those that exist for 3.5" drives, such as the one below that puts 45 drives into 4U.

In time, there should be some higher density rackmount solutions for 2.5" drives appearing, but for now, today's available solutions don't take full advantage of the compactness of 2.5" SSDs portrayed in the above chart, which measures volumtric density of the drive units themselves and not the chassis in which they reside.

Also not clear is whether the 16TB SSD will be MLC or TLC. The 4TB drive is MLC, which means two bits per cell. If the 16TB drive is TLC, then three bits are stored in each cell (eight different voltage levels detected per cell), which can reduce lifespan by a factor of 3 and for that reason are often not considered for enterprise data center use.

For the moment, we're stuck at the inflection point in the above chart at 2014, wondering which dotted line data centers will be able to take in the future. 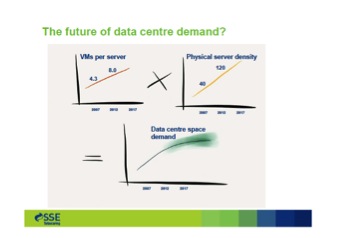 Due to a combination of increased use of VMs in data centers and increased physical server density, projections were that we had reached peak physical square footage for data centers: that no more data centers would have to be built, ever (aside from technology improvements such as cooling and energy efficiency). My blog on Peak Hard Drive threatened to blow that away and require more data centers to be built due to plateauing hard drive density combined with exploding Big Data use. But now with the two SSD announcements, we might be -- just maybe -- back on track for no more net data center square footage.