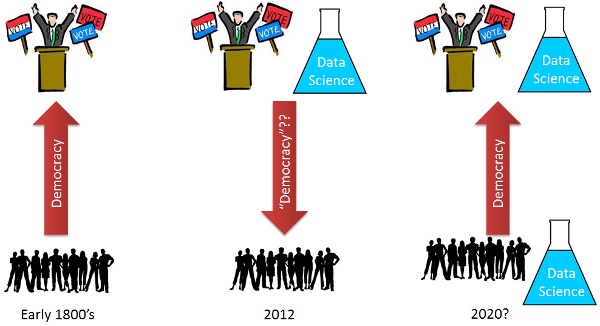 In response to my blog last week Ebola Cell Phone Tracking, Michael Walker, president of the Data Science Association, remarked to me in a telephone conversation regarding my concluding thought. In my conclusion, I had hinted that while tracking specific individuals through cell phones in order to accurately predict the spread of a disease might be acceptable in an extreme case, which Ebola has the potential to be, that such capability should be scaled back and reined in when the crisis is over. Michael Walker's thought was that data science could help the populace determine which situations it is and which situations it is not appropriate for government to have such power and capability.

Then that got me to thinking about the current use of data science in U.S. politics. (I apologize for this blog post being U.S.-centric, but I imagine the general principles are applicable to other countries.) In 2012, the Obama campaign won handily by employing data science to figure out which groups of voters, and in some cases which individual voters, to target for campaign advertising. This power of data science served as a multiplier to the basic power of campaign money. Obama and Romney each spent $1 billion. Voices from all sides have labeled "campaign finance reform" as the most important issue of the day.

In the face of the combined power of money and data science, the electorate are, if not helpless, then at least suffering from an asymmetric balance of power.

If data science were as available to the electorate as it is to the political campaigns, then the electorate could not only be better informed about whom to vote for, they could also:

It's this latter aspect that Michael Walker had specifically in mind. His idea was that the populace could run their own Ebola simulations, or their own terrorist attack simulations, etc. and determine actual threat levels and corresponding error bars. He suggested that with the ultimate power of data science, namely prescriptive analytics, that the populace could determine optimal policy.

That is reminiscent of an idea I had about a decade ago regarding urban planning. Ever since I had a car throw a rod on me in 1999 and I became a pedestrian for a year, I've been an armchair student of urban planning, land use, and transportation. Living in the suburbs at the time, I felt that if there were just some way for the ordinary citizen to see and modify online visualizations of transformations of their suburbs into a more walkable, livable environment, that we could get such positive change. When this is done in meatspace, it's called a charrette. I desired to develop the cyberspace equivalent, but never got the funding.

But having such online capabilities as charrettes, visualization and data science does not guarantee that people will actually use them. In 2007, I came up with an idea that the electorate should be the ones authoring and marking up, in the manner of a wiki, Congressional bills, and not just leaving it up to members of Congress. I even registered several appropriate domain names at the time. But then a year or two later, opencongress.org opened up its doors providing this capability. The problem is opencongress.org has proven to have little if any influence. The electorate does not seem motivated to seek out greater involvement in their own democracy, even though the opencongress.org form of democracy would be more of the Athenian full-participation democracy rather than representative democracy.

It's a catch-22. Although U.S. voter participation in presidential general elections has been steady over the past century, participation in lesser elections, such as presidential primaries -- perhaps more indicative of the willingness of the electorate to vote and participate more frequently -- has declined dramatically. The chart below is from the Center for the Study of the American Electorate and USA Today. 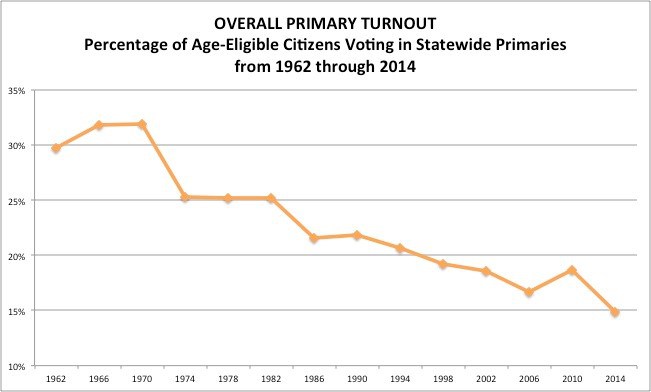 If voters are so detached (and there are many possible explanations, from concerns over electronic voting fraud, to broken campaign promises, to political corruption), then how would they ever come to be so engaged to use sophisticated tools like simulation, visualization and data science?

Perhaps the few citizens who are motivated can use such tools to figure out how to motivate the rest; i.e. use data science for peer-to-peer campaigning as I suggested above, as a way to counterbalance the data science-based campaigning coming from the politicians.

Finally, an explanation of the title of this blog, "Reverse Democracy". It is my personal opinion that the word "democracy" has become a contranym, a word that means the opposite of itself. Originally, democracy meant rule by the people. But with the application of data science, focus groups and "push polls", democracy has in recent years been perverted to flip the direction of power. Campaign money and data science tell voters how to vote. If we take this more recent definition to mean "democracy", then what we need to solve the problem is "reverse democracy", that is, to put us back to the original meaning of the word.